Today I’ve been generating ideas about the metaphors in the poem. I found some really interesting ideas from a blog post online. She talks about the meanings as being haunted by the past. ‘Evident in ‘what dirt shall we visit?’ I kind of see the ‘window-sill’ as being the place of exposure; the transparent glass like a shield from the past – you’re safe from its direct effects and yet you’re still seen; you’re still visible. It’s this visibility that makes the past impossible to forget.’ I think its beautifully said and that the poem focuses on this sense of decay and the past rather than looking forward. I want to show that aspect through the type.

My first thoughts were to show the pace by having the lines physically representing the ups and downs in the poem. I wanted to show more of this decaying factor as I think it’s a big part and featured throughout the poem in lines such as ‘theirs wings which are little more than flakes of dead skin’. It gives of a strong image and I want to show this in the layout but still making the poem readable. A lot of the research I’ve looking at have really stunning layouts but the text is then eligible. I hope I can have a balance between the two in my outcome. 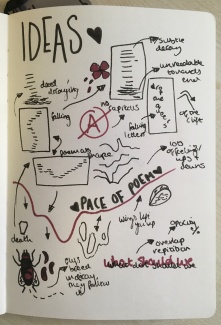 I started working on these ideas above, I first had the text in its separate paragraphs but the pace felt bitty and wasn’t pleasing to the eye. I feel the poem is very fluid and has little punctuation making it flow seamlessly. To visualise this I wanted to take the shades of black and leading styles I used and create a large text box. With this I can then start to show the decay. I’ve started to play around with colours and opacities to show that parts are fading away much like the past. I have also started to drop some of the lettering out of line to simulate drooping that is commonly seen in decaying objects. I like where my outcome is going at the moment but I have lots more to do in order to be pleased with it. I thing next I am going to intensify the all the factors I’ve already included to immediately be recognisable as a decaying piece of text. I want the poem to look as if it is actually decaying from the paper behind.

One thought on “Pace & Tone – Experimentation”