Here is some research I’ve done into a couple of artists who I think really capture the essence of their writing in the visuals. The way they use text is beautiful and unique to them, something I’d love to have myself. 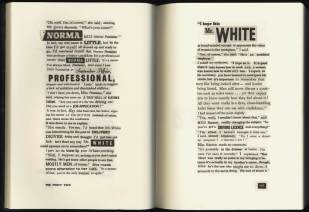 Rawle is a writer, artist and designer. His most famous piece of work, Women’s World, is a ‘collaged novel created entirely from fragments of found text clipped from vintage women’s magazines.’ ‘It has been reassembled to tell the 1962 story of Roy, and his sister Norma’s struggle to live up to the prescribed ideals of feminine perfection’.

I was really inspired by this book because the previous project I’d been working with clippings of old Womens magazine. The way Rawle cuts into the pages is like a ransom note, it has an underlining sinister tone. The book took Rawle 5 years to create which gave him plenty of time to really think out the correct layout for the text. The rags in the book are so neat and the overall aesthetic is so beautifully thought out. The neatness could be a reference to Norma’s struggle to live up to female beauty. The larger bolder text showing that women can’t be a perfect model men wanted them to be and that women are allowed to be rough around the edges. Creating the book out of this particular magazine could also a reference to this ‘female perfection’ aspect, in the original magazine it is heavily focused on pleasing men and beauty. The book is extremely thought-provoking and I’d love to own it one day. 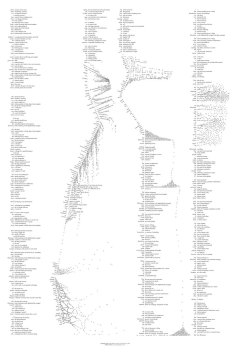 Winston’s work is ‘concerned with language not only as a carrier of messages but also as a visual form in and of itself’. Mostly he works with typography but now has different working methods such as drawing, performance and poetry.

The piece I’m looking at is one called the Dictionary Story book, it ‘re-imagines versions of the dictionary as a concrete poem’.  He mentions that more than half of language is silent and ‘it has to be framed within space’ and this ‘space lets meaning exist’. This is really interesting to see an artist really appreciate negative space, I am a lover of space and letting things breath. The book is ‘typographical romance, filled with wit and tenderness’. The elegantly placed type is stunning and creates lines for the audiences eyes to follow. The layout is a story for the eyes and the text is a story for the mind, connecting both senses which I think is so clever. The shapes made could be seen as anything you want to see, this makes the book super unique to each person. I think the juxtaposition of lined type to muddled is amazing, it makes the page look as if its melting this gives a sense of what the text is about. 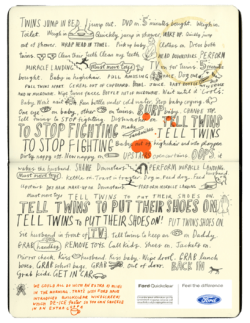 Deuchars is an ‘award-winning illustrator who publishes children’s books and has created a much-loved style of hand-lettering’. She uses her hand rendered type in a multitude of different ways to express different messages.

The piece I’m looking at is an advertisement for Ford. She uses her different writing styles to emphasis certain points. The diary format and overall style makes the outcome feel homemade and comforting. Paired with the tea stains it’s very ‘down to earth’, unlike the others I’ve looked at. She’s emphasised the  text that would have been spoken louder by enlarging it and changing typeface. The size is almost comparative to how she may have spoken it. It is a very complex piece, it feels slightly angry or stressful in some points as she enlarges the phrase ‘stop fighting’. Perhaps its to sympathise with other working mums on how stressful a monday morning can be, connecting on a personal level with your audience is a common form of advertisement so this is what we could be seeing here.

Things I want to take away from my research

Something that really inspired me was Rawle’s use of reused type which gave a whole new meaning to his piece. He used the history of the magazine to work with the message of the story which I think is so clever. I also love the layout of his pages, the fact that he has these very structured paragraphs with lots of open space. This is something that Winston talks about aswell and I want to take this philosophy and portray it in my own work. By doing this I hopefully want to use the negative space to my advantage and have it help show the essence of the poem. Lastly I felt really inspired by Winston’s use of juxtaposition. The way the type contradicts each other and for a second looks almost normal. This is a really clever technique, I feel, and hope to show this in my own poster. My next step after this is getting down all my ideas and start visualising what the poem actually means.