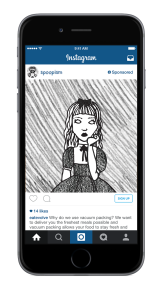 This project was the one I was nervous about updating. I found the software I used a struggle to get to grips with. Although once I’d achieved what I wanted it felt quite rewarding and I’m proud of how my final piece turned out.

From my critique there was one thing I really needed to focus on which was making the message more explicit, as my first outcome was a little confusing. It’s so important that the message is conveyed in the right way because that’s what will bring in my audience to sign up to the movement. I made this change by adding in a scene which explained that having a fright is something good especially when you find out the fright isn’t actually that scary. Another aspect I wanted to improve was the jump from scene 2 to 3 which was too harsh and didn’t completely fit the first time. To combat this I used a zooming out effect to flow from close up to full body shot more smoothly. I think it worked out well and now the whole video works better as a whole. Lastly I wanted to improve the voice over, I felt that each segment didn’t fit together. This was easily fixed by re recording them although this time I recorded them as one whole clip instead of multiple.

Overall I’m quite pleased with the outcome considering the skill set I had working with After Effects. I think it conveys the movement nicely and is eye-catching to my intended audience of alternative internet personalities.