Now we had finished the experimental stages of our metaphors, we were then put into groups and instructed to make a zine. I wasn’t sure what a zine was but I looked up the definition, which is a small self-publication containing original ideas. Usually made by a photocopier, meaning its would only be a rough task to get our ideas flowing.

We really struggled at first because we had used lots of different techniques and our images didn’t fit together. Although considering a zine is only rough we thought about embracing that fact, making it hand-made much like a sketchbook where ideas stem from. This is also the reason we used the concertina style to convey the fluidness of idea generating. Adding the definition at the front was to give a little context to what the piece meant and where our ideas had stemmed from. 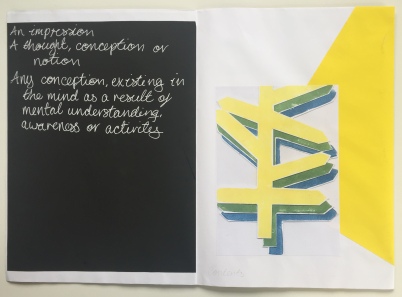 One thing I thought during the making was that I wished we had made it an A5 size. It would have made the zine much more personal and we could have enlarged the images more to really celebrate them. Another thing I think we could improved on is trying to move away from the colour yellow, I think its to obvious for the our word. I want our work to be individual so having a different colour with a personal connotation would be more thought proking.

Our peers gave us some really helpful advice on how we could improve. One thing they had mentioned was playing with the original colours of our images, creating a colour palette throughout which would bring the ideas together as one set. A point I agreed with is having the images take up a whole page each, it would give them space to breath and look more playful. In our improved version I’m now thinking about merging all the images together so they flow through the concertina. This could be done with the photocopier and collaging which would relate back to how a zine is originally meant to be. It would also show the messy nature of idea making. The point about making the zine smaller was also brought up and I defiantly agree with it. Lastly something my lecturers said was to maybe rethink some of our metaphors as using the brain could be seen as being to literal. I’m going to try pushing my ideas further by doing some more research and idea generating.